Not sure if any of us can provide a name of the project from our professional life which followed the plan 100%. Projects are highly unlikely to follow the plan. In order to be able to identify and measure the differences between the plan and the actual work performance, progress on the project is required to be controlled and monitored. This is where S-Curve, a great project management tool plays a vital role 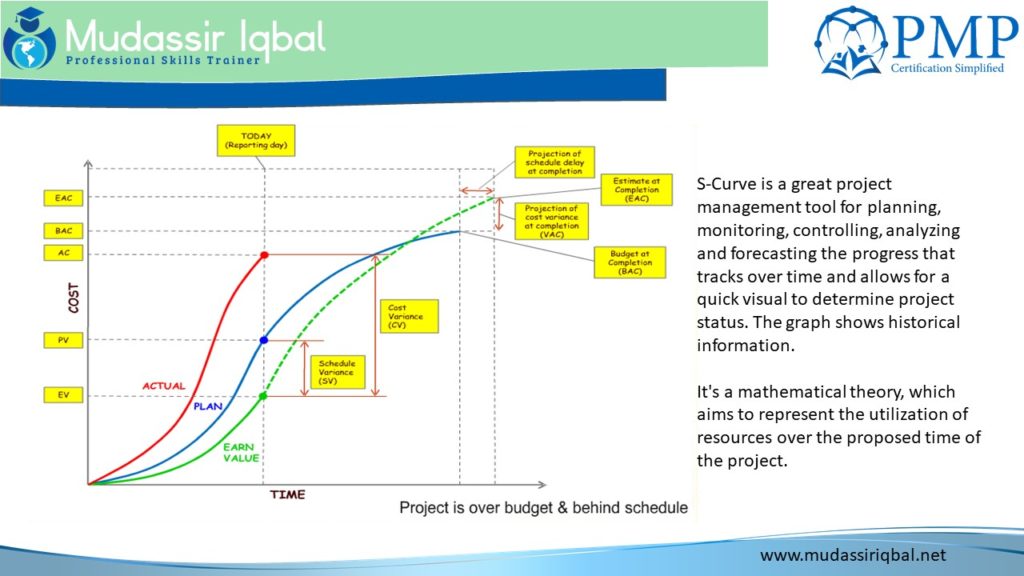 The reason why it’s called an S curve is not a very technical one. It’s because of the S-shape that the graph makes.

During the early stages, the project is starting to unravel, and the team members have just beginning to engage in the first phase of project i.e Initiation and Planning. As more and more progress is made, the growth suddenly starts to speed up, this is usually an execution phase of the project. If you want to this rapid growth in the graph, it will be the middle part of the ‘s’. The point which exhibits the maximum growth is called the point of inflection. After passing the point of inflection, the growth plateaus and forms the upper part of the s-curve. This part is called the upper asymptote. Basically, this is the mature phase of the project or you could say the Closing phase of the Project.

First and foremost, S-curves are used in evaluating the progress of the project in question and its performance. This is achieved through the use of Earned Value Management. 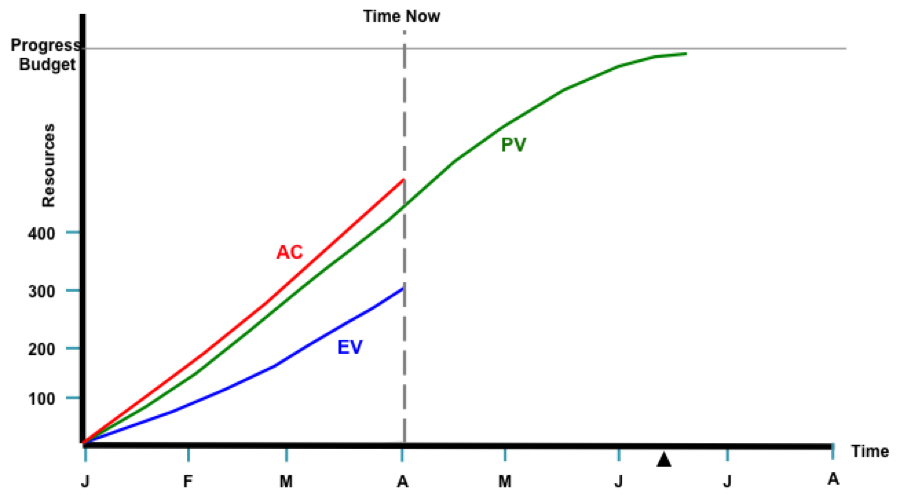 Cash Flow is the timing and the movement of the cash with respect to the tasks and events happening during the project execution.

S curves are to evaluate the quantity output that your project will yield. This is used more prominently in the construction and manufacturing industries. 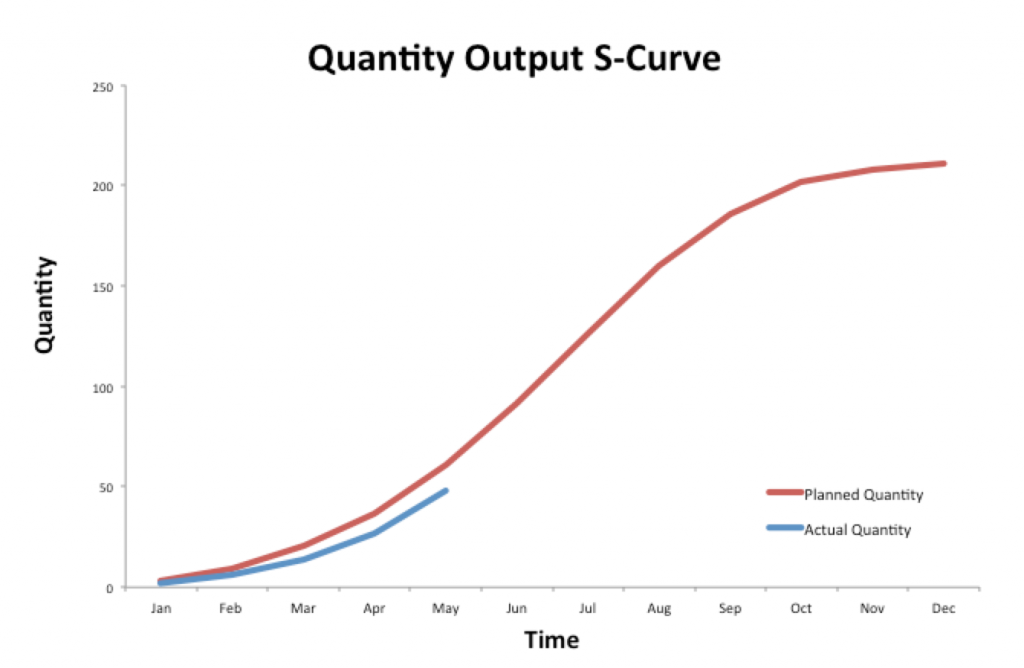 The software can provide two types of S-curves; one according to the schedule early dates and another according to schedule late dates. These two S-curves typically overlap at the beginning and end of the project, producing a banana shape curve, known as “Banana Curves”. 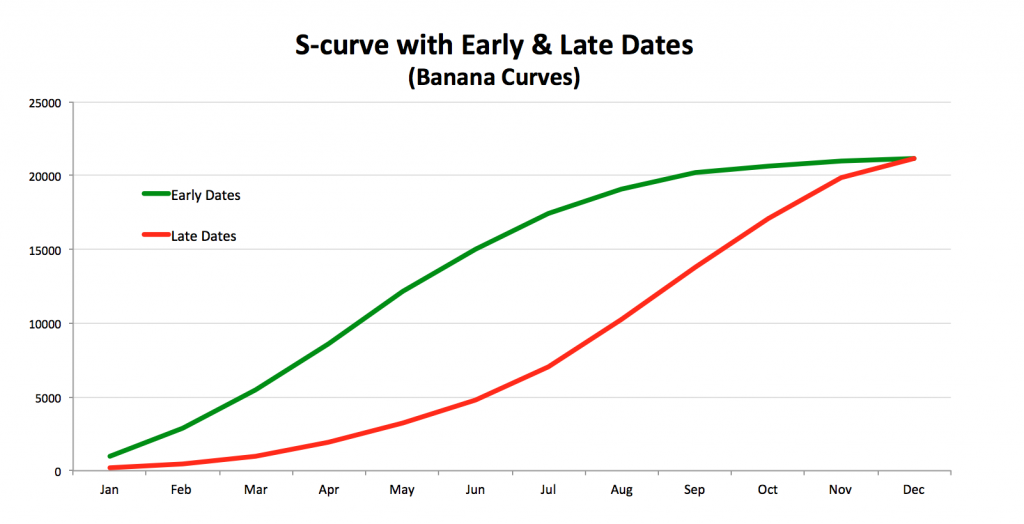 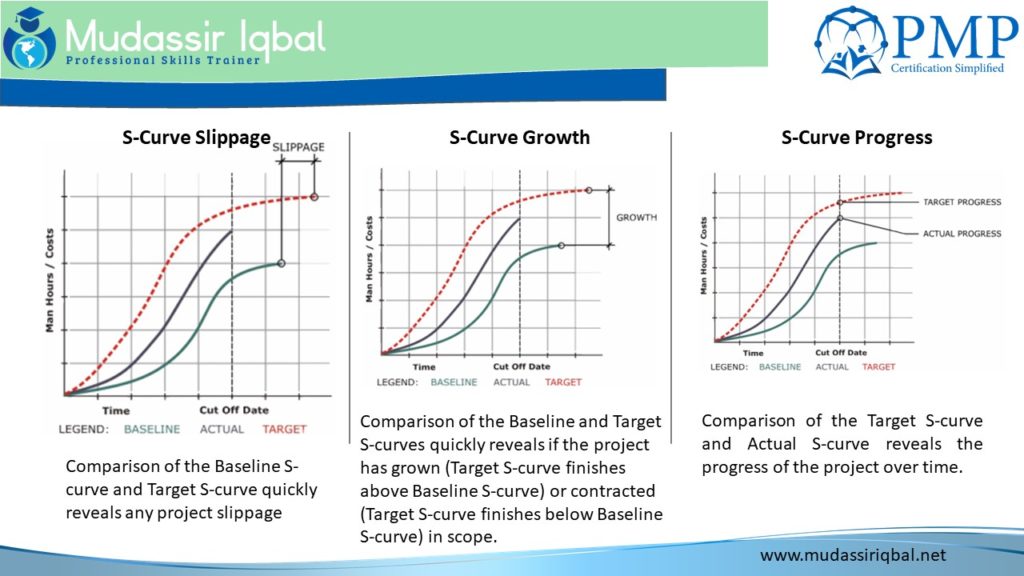 The graph usually shows Something vs Time, as time is the common factor in all Project Management S Curve

This S-curve reflects the planned progress of the project. If the project requirements change prior to commencement (e.g. change of scope, delayed start), the Baseline Schedule may require revision to reflect the changed requirements.

This S-curve reflects the actual progress of the project to date, and may be compared with the Baseline and Target S-curves to determine how the project is progressing

The comparison between Target and Actual S Curve

It is appropriate for projects that contain labour and non-labour (e.g. material supply/hire/subcontract) tasks. It shows cumulative costs expended overtime for the duration of the project and may be used to assist in the calculation of the project’s cash flow and cost to complete.

is appropriate for projects that are labour-intensive. It shows cumulative man-hours expended overtime for the duration of the project,

I am the founder of Know Your Project (KYP) IT Consulting and Training Company. We are based in Pakistan but work extensively with middle-market businesses directly in the European, Middle East and South Asia Regions, as well as through partnerships with multinational companies like yours.I have personally delivered several digital change projects across many sectors globally - including construction, technology, finance, manufacturing, warehousing, logistics, telecommunication. My areas of expertise are concerned with Business Process Re-engineering (BPR), IT Governance and Assurance, PMO Setup, and Business and IT Agility.I also have substantial experience strategizing ERP implementations and have been working with Oracle, SAP, Microsoft Dynamics and Odoo for the best part of my professional life.Both nationally and internationally, I’m also providing in-depth, high-caliber executive development and training in various fields, covering topics such as project planning, project management, leading teams, cultural change.I’m a passionate writer and speaker on the topics of Digital Transformation, CIO, ERP and Project Management.
Related Articles
PMP Certification Simplified! Footer